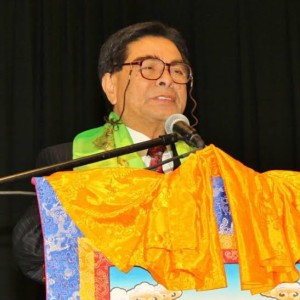 Let Us Promote the Identity, Language and Culture of Newah People!

Let Us Further Strengthen the Newah People´s Commitment and Dedication for Equality and Freedom!

(Keynote Address delivered at the Twelfth Annual Meeting and Convention of

Let me first extend my grateful thanks to all of you for giving me this opportunity of participating as chief guest in this auspicious Twelfth Annual Meeting and Convention of Newah Organization of America and delivering this Keynote Address. It is befitting that we discuss in this glorious Convention subjects ofsolemn importance like `What exactly is the identity of Newah people?´ `What are the features and importance of our language and culture?´ `What are the excellent virtues of Newah people?´ `What remarkable role have the Newah people played in the national democratic struggle of the Nepalese people and in the promotion of human independence and civilization?´ It is quite essential to deliberate in this meeting these important issues and I think it will be appropriate for me also to express my views on them. However it is quite embarassing for me that I am not an expert of language, literature and culture of Newah people as the organisers of this convention have expected. Anyway I venture to stand before you only to share with you my experiences in the capacity of an activist involved in the struggle for achieving the political, economic and cultural rights of the Newah people as well as other people belonging to indigenous communities.

Although you are residing here in the United States of America, your root lies in the place of emergence of your nation or community and the place in which your culture has flourished and evidently that place is NEPAL, particularly its NEPAL MANDAL area. Wherever you stay, you have an inseparable link, unbreakable bond with the national democratic struggle of the Newah people. In order to clearly undertand the nature of this struggle, we should know who exactly the people called Newah ( Newal, Newar ) are .

We know that a tiny country Nepal with a small population of about twenty million is inhabited by diverse people belonging to more than eighty different nationalities. However, of these different communities of this multi – ethnic (or rather multinational) country, the nationality ( or community ) having closest links with the country is undoubtedly the Newah people. The renowned French historian Sylvan Levi has said ´Either the country Nepal has been named after the name of the Newar ( Newah ) community or the name Newah has come from the country´s name`. Another reputed scholar, a linguist of international fame, Suneeti Kumar Chattopadhyay has more categorically commented that the country has been namedNepal as being the land inhabited by the Newars ( Newah people ).

While tracing the history we find that in the ancient times during the days of Buddha our country was called ´Himabatpradesh`and the neighbours like Indians called it ´ Kirat Pradesh` after the name of the ruling Kirat dynasty. A little later towards the time 23 hundred years ago from today the word Nepal came to be used as the name of this country. It appears

That a certain ruler of the Kirat dynasty decided that the country would be named Nepal, its inhabitants or his subjects as Newal (Newar, Newah), while the ruling family would be called Kirat. Eventually the language spoken by Newah people or inhabitants of Nepal came to be called Nepal Bhasha.

It is ironical that the Newah people who are not only the indigenous original inhabitants of the Nepal Mandal area or the main heartland of Nepal but the people who built the art, culture and civilization of Nepal could never become the masters of their land, but always remained the ruled subjects, subjugated tenants of the successive rulers of different times. Thus at some period of time the Kirats were the rulers and the Newah the subjects, at another time the Lichhavis became rulers and the Newahs were ruled subjects, still later Mallas seized the Government as rulers and the Newahs remained their subjects and during the rule of the last monarchial dynasty, the Shah Kings from 1768 A.D. to 2006 , the Newah people were the subjects of Shah rulers (for some period during this time the Rana military oligarchy ruled in the name of the Shah Kings).